Certina is one of the most iconic Swiss watch manufacturers, known not only for its sports watches, but also for its philosophy of creating incredibly durable watches. Throughout its long history, it has remained at the forefront of Swiss innovation in search of precision and sportsmanship, which is why today it has thousands of customers around the world and especially in countries where quality, safety, Price and durability are more important when choosing a watch than brand awareness.

The history of Certina watches is that of a family whose dream was to work tirelessly to be the best of the best.

Certina was founded by the Swiss brothers Adolf and Alfred Kurth in Grenchen in 1888. The brand was first established as a factory for watchmaking supplies and movements. 18 years later, in 1906, the company produced its first complete watches under the name Grana. The watches were a success and for the next several years the company continues to create watches under the Grana name while continuing to supply movements to other watchmakers.

Although the brand name was not officially changed to Certina until 1955, the name was registered as a trademark in 1928. The brand produced its first automatic rotor movement in 1951.

Certainly Certina is known for its DS Concept philosophy. This concept was first introduced in the late 1950s and officially launched in 1959 and becoming an instant success selling over 300,000 watches.

The double security system (or DS) the brand made its watches much more durable than the rest and that they could be used in more extreme situations such as car racing or adventures around the world, and today it continues to be a safe bet for watch lovers who want to wear their watch every day.

Throughout the history of Certina watches, one thing has been proven for sure: the value of a reliable timepiece.

The brand's Double Security system is designed to anticipate and prevent problems, but Ceritna has never stopped innovating. As a result of this innovation and to prevent magnetic fields from affecting the watch, Certina has used an innovative material known as Navichron that increases resistance to magnetism.

To ensure that their watches are ready for anything, Certina also makes all of their watches water resistant to 100 meters or 10 bars.

Nicols Joyeros Madrid 1917 has been the official dealer of Certina watches in Madrid for decades. A relationship that began thanks to the continuous search of two families, the Nicols family and the Certina Family, to offer the best watches at the best price in Madrid.

Since then Nicols in our Certina watch boutique on Calle Goya 55 in Madrid, we have offered and recommended Certina watches and especially the Certina DS to thousands of people around the world, as we are convinced that it is one of the best purchases quality price as far as Swiss watchmaking is concerned.

If you are looking for a Certina watch, do not hesitate, contact us or come to our stores in Madrid, our expert advisors will be happy to help you.

And if you want to know more about the history of Certina watches, here are some important moments from its more than 130 years of history.

Certina watches are well known for their precision, reliability and sporty character. The sports watch brand has built a solid international reputation thanks to quality Swiss workmanship throughout its 130-year history. Do you fancy a trip to the past?

THE SPORTS WATCH BRAND IS BORN

Brothers Adolf and Alfred Kurth established their own watch production facility in the Swiss city of Grenchen. In this idyllic location at the foot of the Jura mountains, between Solothurn and Biel, the brothers and their three employees work in an annex to the family home. Before long, the business flourishes.

During the 1930s, the company used the Certina brand name more and more, for good reason: it's easy to pronounce in all languages \u200b\u200band is based on the Latin word "certus," meaning "sure."

The brand is officially registered in 1939 and in 1949 it is chosen as the only brand.

A SYMBOL OF ROBUSTNESS AND DURABILITY

The tortoise shell symbolizes robustness and longevity, characteristics shared by all Certina watches, without exception.

It is therefore not surprising that the tortoise shell has been the personal symbol of the brand since the 1960s.To this day, the characteristic outline can still be found on almost all Certina watches, as well as on the brand's logo.

It evokes the extraordinary durability that characterizes all Certina watches.

THE DS CONCEPT IS BORN

In 1959, the company launched the first Certina watch with the DS Concept on the market. The Certina DS is an extremely shock resistant self-winding watch with water resistance to 20 bar (200 metres).

This sets new standards for a whole generation of wristwatches.

A NEW CHAPTER IN THE HISTORY OF WATCHMAKING

Certina sports watches are in the mid-price segment of the company group's range.

On the occasion of its 125th anniversary, Certina presents not only a completely new and fresh corporate identity, but also three new watch movements.

The Powermatic 80 automatic caliber is a highly accurate movement with a power reserve of up to 80 hours, and the C01.21 makes a name for itself as an extremely reliable chronograph; The innovative trio is completed by the Precidrive™ caliber, which represents a new generation of quartz watches whose precision is comparable to that of chronometers.

SAVE THE SEA TURTLES

Certina shares her love of the underwater world with the Sea Turtle Conservancy. This Florida-based charity is dedicated to protecting sea turtles and was founded the same year that Certina launched the DS concept for double security: 1959.

CERTINA: The watch designed for sports.

Certina watches are famous for their precision, reliability and sportiness.

Certina watches were formed in 1888 by the brothers Adolf and Alfred Kurth, who established their watch business in the Swiss city of Grenchen, located at the foot of the Jura mountains.

The Certina brand manufactured an extremely shock-resistant automatic watch that was water resistant to 200 meters as early as 1959, the DS (Double Security) series was born. This was in line with the future logo of a turtle company, hard and waterproof. In 1960, the Certina DS model was used in an expedition to the Himalayas to withstand pressure changes and extreme cold without fail. From the highest mountain range, Certina was used by researchers from the US Navy Sealab II. UU.
Currently, the Certina brand offers us a wide variety of men's watches and sports ladies watches with incredible quality since, belonging to the Swatch Group Multinational watchmaker, it benefits from the R&D of the big brands of the group such as Omega , Blancpain or Breguet for the development of their machinery, shared with Tissot and Hamilton.

Certina DS Action, DS Podium, DS Caimano, DS-2, DS-1 and DS-4 are the models that the Certina brand offers us to choose our favorite men's watch or ladies watch.

Joyeria Nicol´s (official dealer Certina) invites you to know the brand on our website, and personally inform you of any model you like in our contact number. 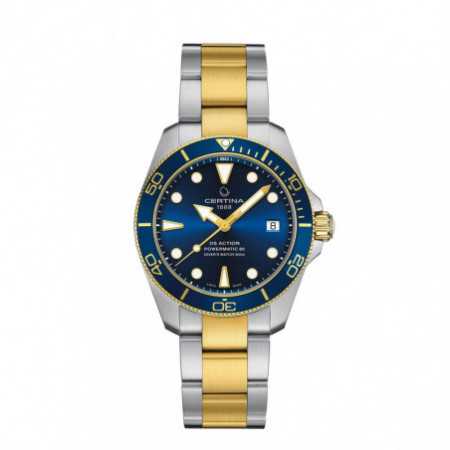 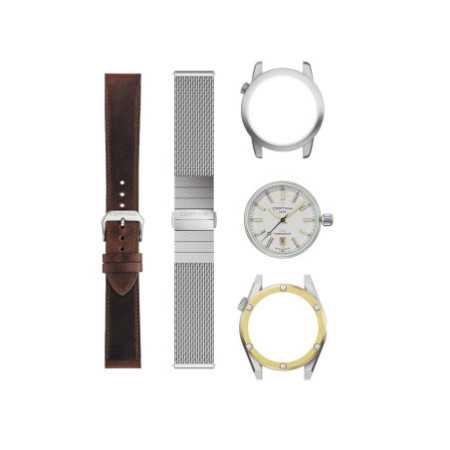 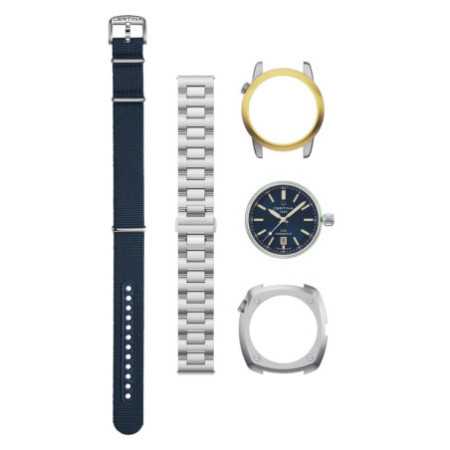 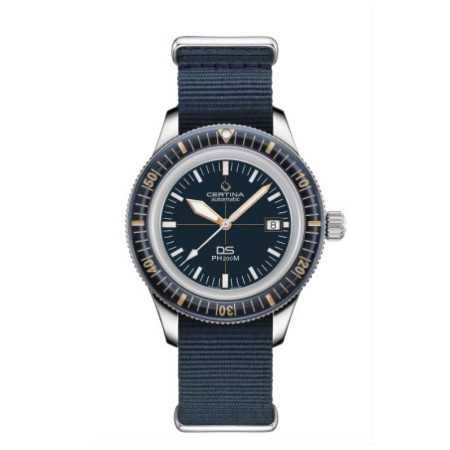 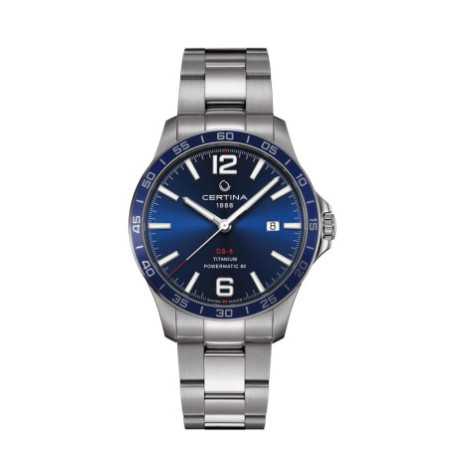 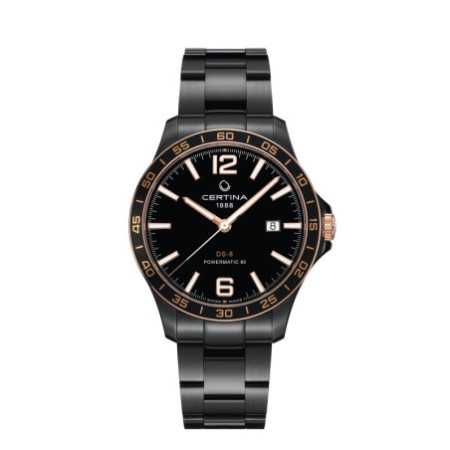 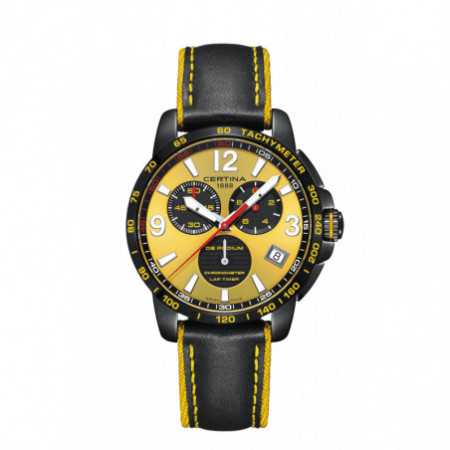 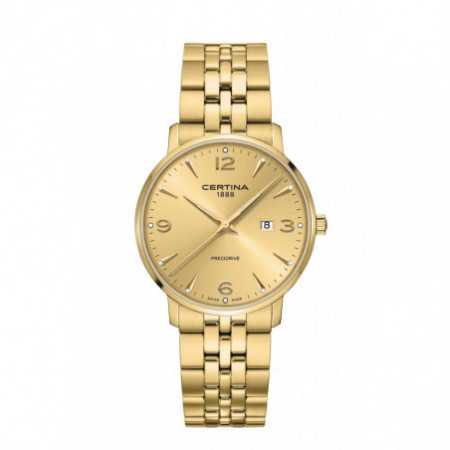 Watch Certina DS Caiman, Caliber ETA Swiss Made. Quartz clock with calendar. The art of watchmaking reduced to the essential: there is nothing here...
Price €433.50 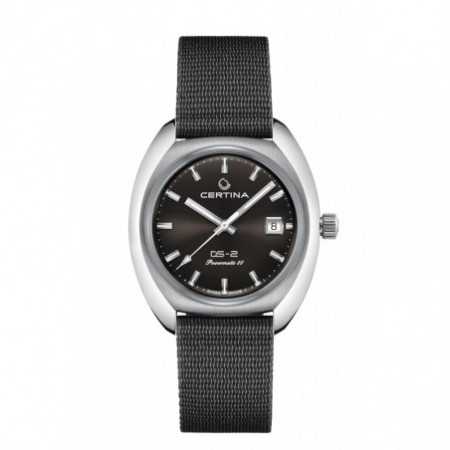 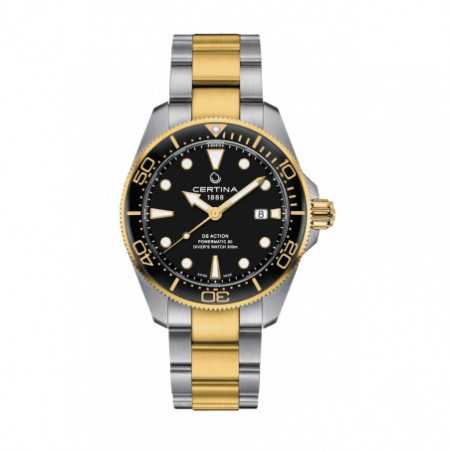